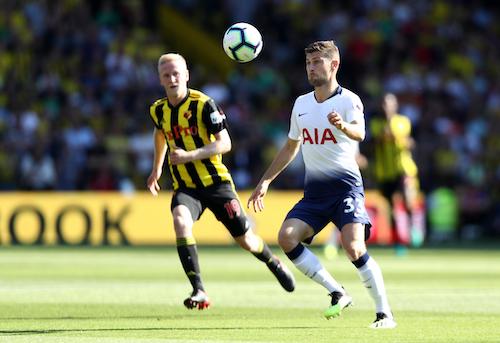 Watford make the relatively short trip to Wembley Stadium to take on Tottenham Hotspur for a Monday Night Football clash on January 30th. This will be the third occasion that the two sides will meet this term, Watford having run out victorious in the league game at Vicarage Road, while Spurs beat the Hornets on penalties in the Carabao Cup third round. Both sets of fans seem relatively happy with their team’s return. It will be interesting to see which side will be able to claim all three points on a cold Wednesday evening.

Spurs seems to be stronger, Hornets are showing off a promising game with a home advantage and an intense drive to win. Even wagering markets around the world are looking forward to this exciting encounter, checking betting sites all over the world to stay updated on their favourite teams. We suggest that you check out EPL Betting Odds by BetEasy for the latest odds and predictions on the most anticipated matches this season like this one.

Tottenham Hotspur are still fighting on four fronts, with the North London outfit still involved in the Champions League, FA Cup, Carabao Cup as well as the race for the Premier League title. While nothing can be taken for granted where this division is concerned, Spurs actually has a very winnable run of Premier League games coming up, with Fulham, Watford, Newcastle, Leicester and Burnley on the fixture list prior to Chelsea at the end of February, followed very quickly by Arsenal a few days later. Mauricio Pochettino’s men have dropped off the pace, slightly following a 1-0 reverse at the hands of Manchester United. If they are able to rattle off a few wins in succession, Spurs could close the gap on Liverpool and Manchester City.

Having been tipped by some pundit to be battling relegation this term, Watford have been one of the surprise packages of the season. Javi Garcia took up the reins at the Hawthorns in January 2018 and having survived a year in the role, he must be doing something right! The Watford hierarchy has a habit of replacing their manager on a regular basis, but Garcia outlasted the four previous coaches and his current form suggests he may even extend his stay further. Watford occupied 7th spot in the Premier League table at time of writing, and although the gap is significant to the 6th position, being ‘Best of the Rest’ is still a very commendable achievement. The Hornet’s recruitment strategy as far as their playing staff is concerned is excellent. England International Ben Foster has been doing a great job between the sticks, while Abdoulaye Doucouré’s performances in midfield have also been of note.

From a personal perspective, I’m obviously hopeful that Tottenham can get the job done. However, I don’t envisage this being a walkover by any means. 2-1 to Tottenham would be my prediction but with Kane and Son both on the absentee list, there is unlikely to be much between the two teams.