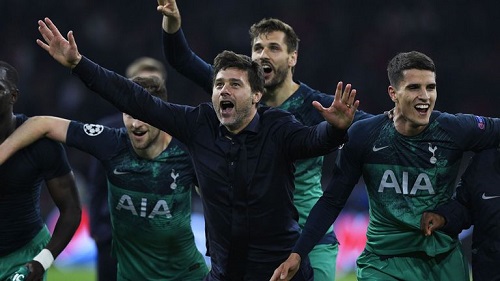 With the dust now settled in Madrid and the events of the Champions League final firmly behind us, it is time to reflect on what has been an incredible season, and even though bitter disappointment was felt at the end, we as fans have witnessed some of the greatest nights in Tottenham’s history. No-one will ever forget that magical night in Manchester or the amazing scenes in Amsterdam, and for those two evenings alone, the group of players that currently wear the club’s colours will be remembered as legends.

However, with the likes of Toby Alderweireld and Christian Eriksen currently considering their futures in North London, there is every likelihood that this same group of players will be broken up over the summer. It’s almost as if the club has reached a crossroads and, although falling at the final Champions League hurdle, shows how far they’ve come. That defeat also highlights, of course, how far they still have to travel.

The loss against Liverpool is one that is going to feel sore for quite some time, and although we might not be too quick to congratulate the Merseyside outfit, we can at least look at them for some form of inspiration. That’s because Jurgen Klopp’s men found themselves in the exact same position twelve months ago, and although there was frustration in losing to Real Madrid, it also gave the club the perfect platform on which to build on. A platform that has seen the club once again earn the mantle of continental kings – of course, not forgetting the fact that they pushed Manchester City all the way, in what has to be considered the most enthralling Premier League title race ever.

If Tottenham is to do something similar next season, they are going to have to prepared to spend some money. Here is where we see the fork in the road for both Daniel Levy and Mauricio Pochettino. Now that the stadium build is finally complete, the only matter left to focus on is the playing personnel. After not buying a single player in the season just passed, there is an anticipation in terms of new arrivals.

If Daniel Levy decides to open the purse strings, then it could be the catalyst for them to mount a title challenge next season. With odds of 16/1 in the Premier League betting 2019/20, Tottenham is currently the third favourite to win the league. If Mauricio Pochettino can strengthen his squad in the off-season, then these odds will begin to represent incredibly good value.

On the other hand, if there is once again a failure to land key targets, it will only serve to make the manager’s job even harder and the danger is, that the loss to Liverpool in Madrid ends up being the unwanted pinnacle of his career.

When it comes to this club, a big season is always mooted as around the corner. More often than not, that fails to be the case. However, you get the feeling that the statement rings true more than ever. Now, we must wait and see, just which turning the club takes from this particular set of crossroads.