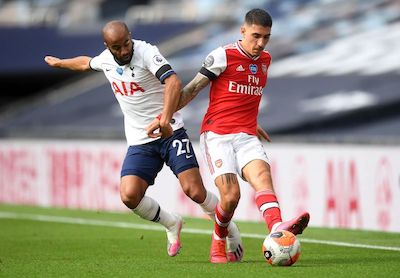 Having started the game brightly, Spurs were slightly unfortunate to find themselves a goal behind thanks to an Alexandre Lacazette wonder-strike at the sixteen minute mark. Fortunately, it didn’t take long for Jose Mourinho’s men to draw level, with Son Heung-min’s deft chip three minutes later breaking AFTV hearts.

Arsenal came into this match on the back of a decent run of results, and the Gunners were actually slight favourites with the bookies and US real money casinos to take all three points. As you might expect considering the position the two clubs are currently in, this North London Summer Derby was quite a tense, nervy affair. While stale at times, both sides had chances to win this game, but it was Spurs who took things by the scruff of the neck in the last ten minutes,

I rarely see Tottenham score a goal from a corner, but that was the method of victory on Sunday. Toby Alderweireld’s late header handing Spurs all three points. While Arsenal had more of the football of the course of the 90 minutes, it was Tottenham who were the more clinical in front of goal. The home side also arguably wanted it a bit more. Something I am quite surprised to be saying about a Spurs side who have appeared lacklustre since the Premier League restart.

This victory leave Tottenham in 8th place in the Premier League table, two points in front of Arsenal, but still six adrift of Manchester United who occupy 5th spot. Although European qualification would now appear out of reach for Spurs, there is still a glimmer of hope. Tottenham Hotspur have three figures remaining against three out of form teams in Newcastle, Leicester and Crystal Palace. Securing a place in the Europa League many not appeal to some fans, but for others, it would be the equivalent of an online pokies win.