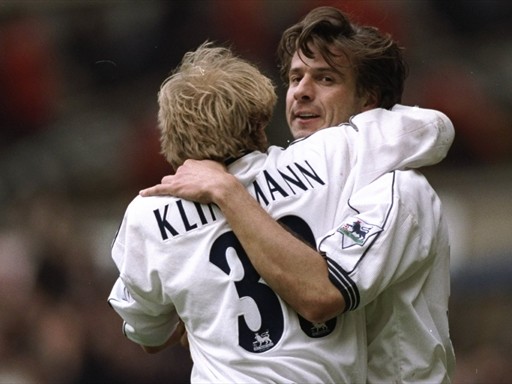 Over the years, there have been a number of Tottenham players who haven’t really delivered on the field of play, but have still captured the imagination of the supporters. Some have cost a little, some have cost a lot, but all of these famous five are well known among the Spurs faithful, often for the wrong reasons! Here are our top five unusual Spurs legends.

Number 5 – Gary Doherty
Is he a striker, a defender, a bird or a plane?! One thing is for sure, wherever Gary Doherty played, he was average at best. Doherty was signed from Luton Town by David Pleat for £1million in March 2000. While he did find the back of the net a few times during his debut season, a broken leg saw Gary out of action for quite some time. The Irishman somehow returned as a defender, but was also used as a makeshift striker as and when required. Doherty went onto bigger and better things at Norwich City, even winning player of the year at Carrow Road. He will always be fondly remembered by Spurs fans thanks to his amusing ability to be able to play at both ends of the football pitch.

Number 4 – Roman Pavlyuchenko
Roman Anatolyevich Pavlyuchenko signed for big money back in 2008, and although the tall Russian scored goals when given an opportunity, he often looked like a complete and utter liability! Pav was a particularly strange case, as the more you saw the former Spartak Moscow man play, the more surprised you were he was a professional footballer, let alone one plying his trade in the Premier League! That being said, Roman Pavlyuchenko had a real knack of being in the right place at the right time, and had a great goal to game ratio during his time with Tottenham Hotspur. While Pav was widely loved by the fans, he never endeared himself to Harry Redknapp, and barely featured once Rosie 47’s master took over.

Number 3 – Serhiy Rebrov
Sergei Rebrov’s legendary status comes from the shock Tottenham fans felt at his downfall after signing for the club. There are no two ways about it, Rebrov was a world class striker during his time at Dynamo Kyiv, but his return of just 9 goals in 29 games during his first season at White Hart Lane was bitterly disappointing. Rebrov never managed to show his best form in the Premier League, and following the arrival of Glenn Hoddle as manager, Serhiy struggled to get a game. As long as the £11m man remained at the club, I always lived in hope that he’d suddenly spring into life and be the shining light we all wanted. Unfortunately, that just never materialised.

Number 2 – Ronny Rosenthal
The Rocket, as he was affectionately known, wasn’t really going anywhere at Spurs until one fateful night during the 1994–95 season. Tottenham were away at Southampton in a FA Cup 5th round replay, 2-0 down at half time and staring defeat squarely in the face. It was at this point that Gerry Francis took the decision to bring on Rosenthal, and this proved to be an inspired substitution. Ronnie scored twice in two minutes to take the game into extra time, before completing a sensational hat-trick. Tottenham went on to win the game by six goals to two, with the Rocket’s performance still discussed to this very day.

Number 1 – Nicola Berti
“My name is Nicola Berti, I’m aged around 30, I come from a club in Milan…Inter! When I walk down the street, All the people I meet, They say, Hey! Gorgeous! Whats your name?” A song that is still sung at the Lane more than 18 years after the player left, it is quite remarkable that Nicola Berti played just 21 games for the club. The Italian was a very good footballer in his prime, and although Berti was arguably just past this by the time he joined Spurs, he still had a solid season for the Lillywhites and the Nicola Berti song is a favourite of mine, and many other Tottenham Hotspur fans.