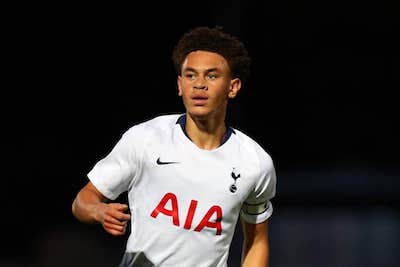 Although Jose Mourinho isn’t renowned for blooding academy graduates, the Portuguese boss has an enviable crop of youngsters at his disposal. With another set of exciting prospects hoping to be given the chance to shine next season, we take a look at three players who should be aiming to nail down a starting spot in 2021.

The 23-year old is described as an “industrious central midfielder” and has earned rave reviews on loan at QPR this year. Mourinho is likely to assess Amos’ pre-season performances before making a decision about his future, however, he could prove to be a huge asset if given the opportunity next season. He may be slightly older than many of his fellow academy graduates, but this won’t have been helped by the fact he suffered a significant setback when rupturing his ACL at the back end of 2018. The injury struck within months of him catching the eye of then-manager Mauricio Pochettino, and it’s been a long and slow road back to full fitness for the Welwyn Garden City-born star. Although he’s primarily known for his tenacious qualities, he’s also found the net twice for the R’s this season, whilst four of his eight shots have found the target. He’s also attempted the second highest number of dribbles at Loftus Road this season and has noticeably grown in confidence as the season has progressed.

The York-born winger has also spent the second half of the season on loan at QPR and many fans believe it’s “now or never” for the England Under-20 international, who has failed to impress in each of his recent spells in the second tier. He endured a disappointing spell on his return to Leeds United earlier in the campaign, with the attack-minded youngster unable to break into Marcelo Bielsa’s starting XI. The Argentine boss has largely resisted rotating his squad this season with the Whites in the hunt for automatic promotion. The West Yorkshire outfit have been favourites for automatic promotion in the Championship betting markets throughout the majority of the campaign, and despite their mid-December dip in form, Clarke was still unable to get a look in. He must knuckle down and work hard in training over the coming months in order to catch the eye of the Spurs hierarchy, although given the opportunity, he undoubtedly has the chance to be a match-winner.

Out of the three, Skipp has the most first-team experience and looks set to play an even bigger role next season. With Tanguy Ndombele’s future in North London up in the air, this may just open the door for the talented 19-year old. He’s played just 56 minutes of Premier League football in the last 12 months, although he’s barely put a foot wrong during those brief top flight cameos. Having trained with the first team for a number of years, he is likely to have picked up plenty of tips from some of his more experienced teammates, and many Spurs fans believe that he now deserves his chance to shine. Alongside Harry Winks, he helps to effectively screen the back four, adding an extra layer of defence. He uses his body to help shield the ball, which enables his teammates to get back into position. At the other end of the pitch, he has also proved fairly adept at finding space in the opposition’s box.

Once again Spurs have a superb crop of young players who are all desperate to make a name for themselves in North London. Each of these three players will be hoping to establish themselves as a regular first team starter over the next 18 months, and if they continue to impress on the training field, they should be definitely be given the chance to shine in the top flight.