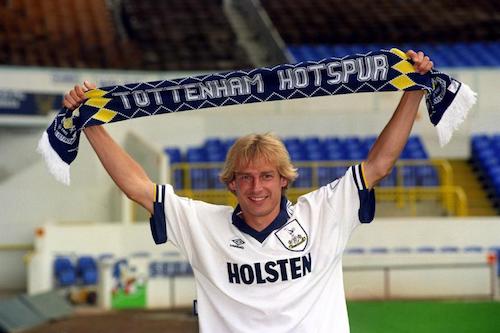 It’s time to take a trip back to 1994, where Freddo bars cost 10p, the Wets were in their twelfth week atop the UK charts, and a certain German was about to set alight the passions of many a Spurs fan.

As opening day draws ever closer, fans across the summer will be full of hope that their team can build on last season. For Tottenham’s motley crew of 1994, that wasn’t going to be difficult to achieve, with the Lilywhites finishing in a disappointing 15th place and only three points outside the relegation zone that May.

In the summer of 1994, the powers at White Hart Lane decided to bring in three foreign players, with two of those being Romanians in Ilie Dumitrescu and Gheorghe Popescu. Both men failed to live up to the expectation surrounding them, and they were joined by a certain German named Jurgen Klinsmann, who arrived for a smaller fee.

The ‘Klinsmann game’
Ahead of 2018/19, Tottenham’s opener with Newcastle is, according to Infogol, odds-on to see both teams score. Back in 1994, the same would have undoubtedly applied to Sheffield Wednesday vs Tottenham: the match that would, as predicted, headline the opening day of 1994/95 as a goal-fest. With an array of new signings in Tottenham white, few doubted that the Lilywhites would want for goals, but they faced an industrious Sheffield Wednesday side still high on a 7th place finish in 1993/94.

The game finished 4-3 to Tottenham, leading it to be known in some circles as the ‘Klinsmann game’ and it was the start of a much better season for Spurs as they finished 7th and reached the F.A Cupsemi-finalss – but exactly which Spurs player went on to achieve the greatest career following that memorable game? In that regard, three stand out as prominent.

Jurgen Klinsmann
Perhaps it was Klinsmann himself? Tottenham fans know very well what happened with the German international after that season, with the lure of Bayern Munich too strong for him to resist. At the time of his Tottenham debut, Klinsmann has already reached the age of 30 and his greatest achievement – winning the World Cup in 1990 – was already behind him.

He also had a modest haul of club honours by the time 1994/95 dawned, with triumphs in the UEFA Cup and Coppa Italia for Inter Milan. At Bayern Munich, however, he would win his one and only league title (in 1997) winning the UEFA Cup again the year before. Whether his move to Bayern had any bearing on his three-goal haul at Euro ’96 remains a pub debate.

Klinsmann wasn’t away from England for long, returning to utterly devastate Nottingham Forest in a UEFA Cup tie, before doing the same to England’s hopes of bringing football home.

Sol Campbell
Another player from that 1994 team who went onto achieve great success is one that leaves a bitter taste in the mouth – Sol Campbell. He was undoubtedly one of the best centre-backs of his era with the obvious highlight being his ‘invincible’ season of 2003/04. He would also win two league titles and two FA Cups with Arsenal, as well as an FA Cup with Portsmouth in 2008.

Naturally, most Tottenham fans are loathe to remember what he did in the white and navy before his act of ultimate betrayal. However, nobody can deny that the seven years of service he gave after the Hillsborough thriller of 1994 were crucial to giving the club stability on the pitch. Since that match, only one further campaign (1997/98) brought genuine relegation worries for all connected to the club.

While he is one of a select few who can claim to be an ‘invincible’ in the Premier League era, the latter days of his career were characterised by series of poor moves – culminating in an infamously bad return to Arsenal, and a five-minute spell at Notts County. Being a part of the so-called ‘golden generation’ generation of England players that won nothing is also something of a stain on his legacy.

Teddy Sheringham
The third player from the ‘Klinsmann game’ who could potentially claim to have achieved more than his peers is Teddy Sheringham. Though he never got much of a chance in that England team as a starter – due to the formidable talent of Alan Shearer and Michael Owen – Sheringham was famous at club level for making an impact at crucial times.

While Tottenham fans were gutted to lose him in 1997, the more philosophical Lilywhite will appreciate the gulf that existed between the club and Manchester United at that time. The move gave him a chance to be a part of a history-making team, with Manchester United winning the treble in 1999, and following up with two league titles before his return to White Hart Lane.

The verdict
With only the years after 1994 considered, most Tottenham fans would ultimately point to Sheringham as the biggest success from the Tottenham team which began 1994/95 under a cloud of controversy. Despite being part of a team initially lumbered with a twelve-point deduction and a ban from the F.A Cup (both later overturned), Sheringham chose to stay put, and spearhead Tottenham as he approached his peak playing years.

Naturally, even to this day, Tottenham fans remain in wonder of what could have been had Sheringham’s career in North London gone uninterrupted for twelve years. In Harry Kane, there is a striker who already compares favourably to Sheringham. While his head remains unturned by the likes of United, the Tottenham of 2018 should stay in touching distance of the title, and a chance to succeed where colossi such as Klinsmann, Campbell and Sheringham failed in the famous white and navy.