With the season drawing to a close, it is safe to say that it has definitely lived up to the hype. There have been some incredible and unbelievable moments during the season that even premier league betting enthusiasts would have been unable to predict. Here are some of the most iconic moments from the 2016/17 Premier League season.

St. Totteringham’s Day is no more
Depending on which North London team you support, this moment could be considered iconic or a disaster. Since 1995, Arsenal have finished above Tottenham in the league in every Premier League season. In recent years, Arsenal fans tend to celebrate when it becomes mathematically impossible for Spurs to finish above them in the league – known as St Totteringham’s Day. This streak almost came to an end last season, but a humiliating 5-1 to Newcastle on the final day meant Arsenal managed to finish above Spurs on the final day. Spurs made no mistake this season as an impressive, consistent campaign meant they finished above Arsenal for the first time in 22 years. This achievement was probably even more special for Tottenham fans as they managed to ‘end’ St Totteringham’s Day by winning 2-0 against Arsenal in the final North London derby at White Hart Lane. 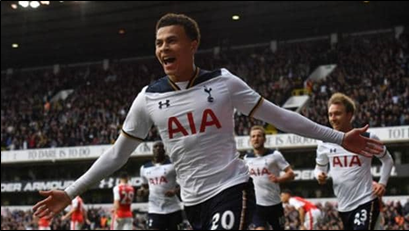 Pogback
There is no doubt that the world’s biggest transfer is one of the most iconic moments of the season. The transfer of Paul Pogba from Juventus cost Manchester United a staggering world-record fee of £89 million. Although Pogba’s performances may not have matched the expectations a world record price-tag so far, this transfer showed the world that United are still able to attract some of the best players in the world. 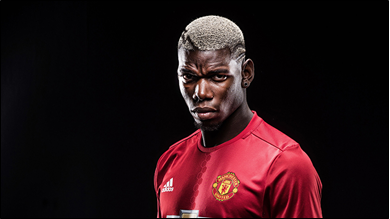 Olivier Giroud scorpion kick
Every Premier League season often has its fair share of wonder goals, but these are usually screamers from outside of the box. It is very rare that you see a moment of pure brilliance from a player that leads to a truly spectacular goal. Although Olivier Giroud isn’t the most technical of players, his goal scoring record shows that he knows where the back of the net is. This sensational scorpion kick goal against Crystal Palace proved that he has a natural instinct for goal. Although a cross into the box was poor, Giroud managed to make the most out of the situation and ended up scoring a contender for goal of the season. 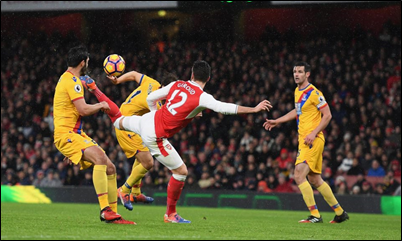 Andy Carroll overhead kick
With a new 60,000 seater stadium, a good core of players, and a successful 15/16 season, many expected West Ham to build on their success. Unfortunately for the Hammers it has not gone to plan and in some ways, they have regressed. With the substantial progress made last season, this season has been a disappointment to West Ham fans. Despite the negatives, fans have still been treated to some good football and seen some amazing goals in their first season at the London Stadium. One of the best goals of the season was scored in front of West Ham fans by their own player, Andy Carroll. Although Carroll has been plagued with injuries during his career, his overhead goal against Crystal Palace showed that he can still deliver the goods when needed. 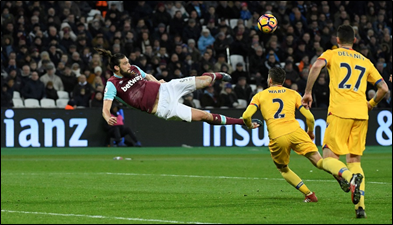 ‘Wenger Out’ & ‘Wenger In’ planes
It’s fair to say that this season has been very eventful for Arsenal, with more downs than ups. As a result, the fan-base has become divided with some fans ‘Wenger In’ and some fans ‘Wenger Out’. Although the Wenger In / Wenger Out debate has been discussed by Arsenal fans for a few season, the debate has become increasingly heated this season. This ‘split’ was best shown in Arsenal’s game against West Brom at the Hawthorns. Although Arsenal fell to a 3-1 defeat, the highlight of the game was the fact that two planes flow over the stadium with two different banners (Wenger In & Wenger Out) within a few minutes of each other, highlighting the current split in the fan-base. 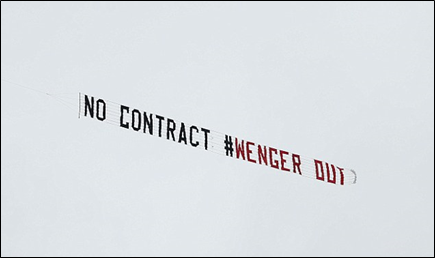