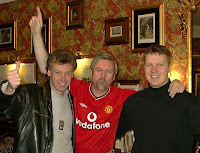 I got a bit of stick for bringing up the dossier last night but it doesn’t look like it will carry as much weight now thanks to Manchester United’s Scandinavian supporters’ branch!!

It’s been widely reported today that they are taking the heat for the quotes attributed to Fergie in the British press regarding Berbatov last week. Bit convenient for me, but I’ll let you decide.

“A feather has become 35 hens here. It might seem like we are to blame for what has happened,” admitted the branch’s webmaster Steinar Madsen to Aftonposten.

“We are to the blame in the sense how the interview was presented. Ferguson didn’t mention the name Berbatov when he was interviewed by us.

“I would call it a misunderstanding. It was tricky conditions for the interview.

“As journalists, you have probably experienced this yourself, how it is to listen to the tape afterwards.

“That can cause problems and Ferguson’s accent is not too easy to understand to start with.

“Ferguson confirmed that United had tabled an offer.

“We assumed it was Berbatov he was talking about. We might have taken it too far.”

I wonder what they got in return? The secret to Fergie’s rosy red cheeks? A bit of Ole Gunnar Solskjaer’s knee? Or maybe the best of Darren Ferguson dvd?

I know what you’re thinking, why don’t Spurs have a Scandinavian supporters’ branch to cover this type of eventuality? Well they have but not one that can compete with Manchester United’s.
What Spurs do have though are these bad boys http://www.spurs-sg.org/ – The Singapore Supporters Club.

They look way tastier than Utd’s Scandinavian outfit, I just hope Daniel has their number.