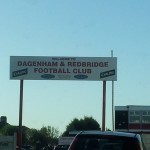 So, this past Sunday I was invited along to Dagenham and Redbridge’s Victoria Ground to interview Spurs coach Clive Allen. Clive was taking part in an ‘England Legends’ match against a supposed Sunday League side, Ivory FC. The Legends were made up of a number of ex professionals, some who had played a lot more games for England than others, but the main thing they had in common was that they all looked quite old. Ricky, one of the members of the Fighting Cock podcast team, remarked that the majority of them had significantly bigger heads than when they were playing at the highest level. This was quite an accurate assessment. I’d personally only noticed this phenomenon happening to actors including Eddie Murphy and Steven Segal but apparently, footballers also suffer from the same affliction.

When I arrived at the ground, I met up with an Irish chap called Dave who was doing the PR for the event. Nice bloke who I got the distinct impression was a big Liam Gallagher fan. Along with Dave were Ricky and Flav who are two of the guys from the excellent Fighting Cock podcast. After a bit of small talk, we quickly bonded over our mutual love of Spurs, hatred of Arsenal, and childish sense of humours. Although to be honest, I think they were just were just interested in stealing the questions I’d prepared for Clive Allen as the only one they had come up with was ‘Clive, what do actually do at Spurs?’.

After some impressive keep ball from the Legends during the first ten minutes, Ivory FC took a shock lead. Rob Lee had the opportunity to equalise from the penalty spot but put the ball wide. At least I think it was Rob Lee, he looked a lot like Philip Schofield. You can see the video of that miss here. Although you might find the physique of the Ivory FC goalkeeper rather amusing, he made some cracking saves during the game and was arguably better than his opposite number Ian Walker, who still had blond curtains in case you’re interested.

Unfortunately, Clive Allen came off injured early in the first half but it did mean we were able to get out of the cold early in the second half and into a room full of sandwiches to fire questions at the former NFL Europe star. Before we got under-way, an issue arose about us not being able to ask Mr Allen any questions relating to the current Tottenham set up without clearance from the Spurs Press Office. Our super camp friend from Football Fancast completely ignored that and proceeded to ask him two completely unsuitable questions. I’m glad we let him go first because it made us seem much more professional and totally not gay. It turned out ‘The Press’ that I’d heard referred to all day was actually the four of us and considering we had to try and avoid anything too Tottenhamy, I think we did a bloody good job.

Other highlights included Terry Venables wandering round looking like a gangster, Ian Walker ghost handing everyone that wanted photo’s with him and a sense of relief when I arrived home to find out that former Norwich City manager Mike Walker was alive and well. Flav misinformed me that he was brown bread and while I was unsure, I wasn’t brave enough to ask Ian if his dad was still with us.

I was also on with Ian Wright on Saturday afternoon, the Podcast is available here. My excellent segment starts at around the 33 minute mark. It’s not actually that excellent, or an official segment. http://www.absoluteradio.co.uk/podcasts/Ian-Wright-on-Absolute-Radio/2011-11-26/

I’m just waiting on the audio from the Clive Allen interview, I’ll post it shortly.

Should probably also mention the Legends lost 2-1. In their defence, I do think the Ivory FC keeper was wearing a fat suit and a few of their players were brought in by El Tel from Argentina or somewhere equally exotic.