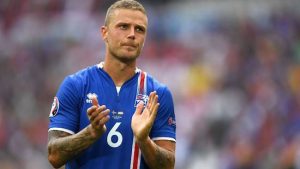 Rumours have been circulating this week regarding Iceland defender Ragnar Sigurdsson’s services being wanted by both Tottenham Hotspur and Leicester City. Sigurdsson was superb during Iceland’s 2-1 victory over England in the last sixteen of the 2016 European Championship this past Monday night, and the player’s performances throughout the tournament have caught the attention of […]

Although Tottenham bossed possession during Sunday’s 3-0 defeat at the hands of Liverpool, the home side never really looked like they were going to get anything from the match. One shot on target against Liverpool’s eight tells the story and a goal from Raheem Sterling after eight minutes quickly killed the feel good factor generated […]

Tottenham invested heavily over the summer as they tried to fill the void left by Gareth Bale, and while they have filled his place in midfield they are seriously missing his goal scoring exploits. Although new signing Roberto Soldado has been more than promising, the side do at times look short of a striker.We’ve taken […]

I saw a stat on Twitter earlier which I quickly passed on to my WhatsApp group, which is full of Gooners, Chelsea and Millwall fans. Basically, they all hate Spurs. @BBCSport: Spurs have conceded the fewest of any team in Europe’s top five leagues so far this season. I was quickly shot down, ‘You’ve played […]

Andre Villas-Boas’ revamping of the Tottenham squad has continued after Scott Parker was allowed to join Fulham on a three-year deal. The 32-year-old former Charlton Athletic, Newcastle United, West Ham United and Chelsea midfielder has moved to Craven Cottage for an undisclosed transfer fee. Parker has won 18 caps for England and featured in more […]