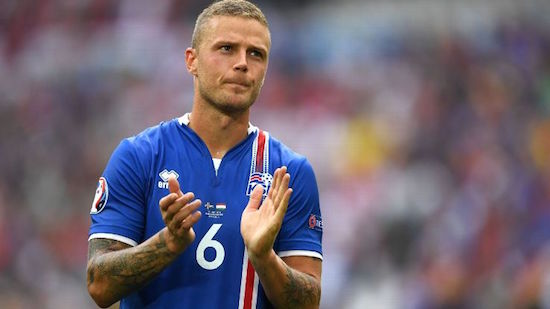 Rumours have been circulating this week regarding Iceland defender Ragnar Sigurdsson’s services being wanted by both Tottenham Hotspur and Leicester City. Sigurdsson was superb during Iceland’s 2-1 victory over England in the last sixteen of the 2016 European Championship this past Monday night, and the player’s performances throughout the tournament have caught the attention of a number of high profile clubs. Sigurdsson is currently plying his trade in Russia with Premier League side Krasnodar whom he joined in 2014 on a two and a half year deal. The 30 year old spent the best part of four years at IFK Goteborg, before signing for Copenhagen in 2011. A big money move to the EPL is obviously going to make plenty of appeal to Ragnar Sigurdsson at this stage of his footballing life, but I would be surprised if he joined Spurs instead of Leicester.

Tottenham have a number of options at centre half, and even with the number of competitions the club are involved in taken into consideration, I doubt Ragnar Sigurdsson would get much of a chance in the first team. The partnership of Jan Vertonghen and Toby Alderweireld is arguably one of the very best in Europe, and unless one of these two get injured, I can’t really see Mauricio Pochettino leaving either man out of the side too often. For the League and FA Cup, we are likely to see a squad rotation policy utilised, but I’d be surprised if Sigurdsson is going to want to be bit part player at this stage of his career. The Icelandic defender has well and truly put himself in the shop windows this summer, and a move to Leicester would make more sense to me.

Kevin Wimmer was excellent when covering for the absent Jan Vertonghen for a large part of the 2015/16 campaign, and I’d imagine that the Austrian will once again be Pochettino’s go to guy. Eric Dier is also capable of dropping back into defence when required, and I struggle to see where Ragnar Sigurdsson would fit into this already strong Tottenham squad. While Sigurdsson has looked exceptional during the Euros, it is open to question as to whether or not he would be able to produce the same level of performance week in week out in the Premier League, and it is also surprising that the player has not been signed by a big club before now. While the more options Tottenham have within their playing ranks the better, I just feel that a move to another Premier League team would be the preferred option for Ragnar Sigurdsson. It will be interesting to see how this one unfolds in the coming days.