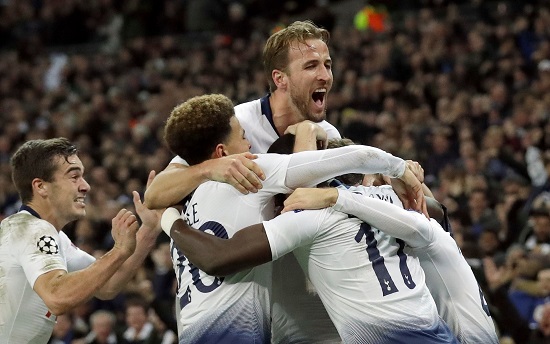 If Spurs don’t end up winning the Premier League, it shouldn’t stop Mauricio Pochettino claiming the Manager of the Season award. What the Spaniard has done at Tottenham Hotspur is nothing short of a miracle and arguably the finest management of a Premier League team since Claudio Ranieri inspired his 5000/1 Leicester to the title.

To have his charges within the running for the Premier League title without having spent a penny on players over the course of two transfer windows is a phenomenal feat. A lot has been made about the size of the Spurs squad and the strength in depth, but that hasn’t stopped the 46-year-old from being able to deliver the goods throughout the season.

Honestly speaking, winning the Premier League looks just out of reach this year, especially as City seemed to have found the gear that drove them onto 100 points last season, but that doesn’t have to signal the end of any silverware this season.

After thumping the Bundesliga leaders Borussia Dortmund 3-0 at Wembley in the first leg of their round of 16 clash, Spurs are perfectly poised to sail through to the Champions League quarter-finals. Once in the last eight, the Lilywhites must back their chances of going all the way. Some may argue that is a sensational thing to say but really, it absolutely isn’t.

What a night! ?????? Fantastic result! Thank’s to all the fans for your amazing support! #UCL #COYS #THFC pic.twitter.com/iMYESBLsHR

Pochettino’s troops are a tenacious bunch and when faced with a certain exit from the Champions League group stages, they were able to go to the Nou Camp on matchday six and get a well-earned point to secure progression. Now that they’ve blown away Dortmund, there should be a real sense of optimism at Spurs.

They’re certainly not the team everyone is talking about to win the Champions League and bookmaker moplay.co.uk has Spurs at 16/1 to be crowned European champions. With Harry Kane about to be pronounced fit again and Spurs on the brink of the quarter-finals, those odds will be slashed in a few weeks and then there will be real talk of how far Spurs can go, especially if they get a favourable draw for the next round.

The middle of April is being suggested as the opening of Spurs’ new stadium for the visit of Huddersfield and what a significant boost that will be to the team if they are still in the Champions League shakeup. Fine lines often decide champions and if Spurs can receive any sort of surge in form once taking up residence in their new home, they will be hard to stop.

Great to be back with my team. ? #COYS pic.twitter.com/f7cnhEm6Od

By that time, they may officially be out of the running for the Premier League title, but have already secured a top-four finish. If that’s the case, Pochettino can afford to focus purely on the Champions League, which is something Liverpool and City won’t be able to do should either of them still be in it, and drawn against Spurs.

After five minutes’ thought, you do realise that Spurs’ current position lends itself ideally to going all the way in Europe. Pochettino should have his men daring to dream given how the last few months of the competition could play right into the strengths of his side’s domestic situation.