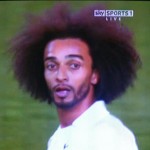 How can anyone dare to question the abilities of my favourite Satay House fan Benoît Pierre David Assou-Ekotto? Not to be confused with the wife and child killing wrestler Chris Benoit, Assou-Ekotto has been one of our best players this season as far as I’m concerned. That is in addition to having the world’s biggest head of hair and saying ‘lol satay house’ on the majority of his tweets. Obviously he’s playing in a very good team, but their aren’t many better left backs in the Premiership currently. His link up play with Bale is consistently excellent and some of his cross field balls are so accurate it’s scary. Ekotto was labelled as a weak link by some idiot this week and while I wasn’t his biggest fan a few seasons ago, Pierre has improved out of all recognition and is also such a likeable character.

I had to come up with three transfer targets for a piece I was writing for the Metro this week and while I found it hard to think of any players that would better what we already have at the club, a new left back was certainly not on my mind. Carlos Tevez was however and while I knew it was a massively long shot, I didn’t expect Milan to say they were having a nice little chat with him an hour later. I might have to re write that now eh?! Maybe we could do with a top class centre half the right side of 30 to cover our hugely talented but equally injury prone mob. Christopher Samba was my weapon of choice but Gary Cahill would suffice. Oh and I like the look of a chap by the name of Fernando Llorente. Scores for fun if you’re reading Harry, he’d be worth a little bid in Jan.

I’m doing the Paddy Power podcast tonight, it revolves around Spurs and betting, the only two things I know much about…arguably anyway. Spurs’ chances of winning the title is the theme I believe. I feel their quote of 16/1 is on the stingy side, but we are less than half the odds of Arsenal so maybe Paddy has got it about right.

You can listen to my Clive Allen interview at The Fighting Cock website. I couldn’t work out the uploading procedure properly. I will at some point learn how to do it, but at the time I was busy trying to volumise my hair to Assou-Ekotto proportions before visiting my local satay house….