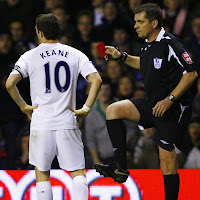 Our first serious friendly of the pre season against Hercules of the Spanish 2nd division last night ended 1-1 thanks to a Darren Bent equaliser. (Yes, I did say Darren Bent!)

I know Bent scoring is a big story in its own right but two others almost as big were;

Robbie Keane was not even on the bench.

Expect to see Keano in a Liverpool shirt in the next couple of days. There is a line in the film The Color of Money that goes something like this, “I’ve given you as much as I can, I’ve showed you everything, I’ve shown you my ass.”

Well I feel like Keane has showed us his ass and anything around the £20m mark is good money for an ass we have been seeing for years. He needs a fresh challenge and we need new blood, someone who is hungry and whose ass we are yet to see.

I know we are short up front but I don’t really see the value of playing Berbatov. He won’t be around for the start of the season; Ramos may as well keep playing Pekhart until another striker is brought in.

Paul Robinson hasn’t even travelled to Spain and Blackburn have reportedly made a £3.5m bid for Rockin Robbo. According to today’s press, this paves the way for Bentley to go in the other direction. (Not one quote from anyone mind, just ‘sources’) We all know Bentley’s coming to the Lane but it’s just the price tag holding up the deal, I’m sure it will happen before the start of the season.

In other news, Anthony Gardener’s move to Hull is actually a loan deal until January with a view to making the move permanent. Can you see this lump not getting injured or having a nightmare between now and Jan? I know, I’m also excited at the prospect of having him back!

Younes Kaboul is joining Tainio at Sunderland by all accounts; sounds like Pompey aren’t willing to match Sunderland’s offer or wages. Quite a turnaround from this earlier in the week courtesy of Kaboul’s agent;

“Younes would not join Sunderland – even if there was an earthquake”.