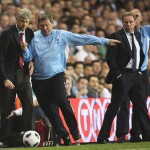 This Sunday sees Tottenham coach Clive Allen join the England Legends taking part in Nivea for Men’s Great Football Experiment this weekend. Clive and a team of fellow ex pros take on the might of Ivory FC, from the Brentwood Sunday Football League. I’ll be interviewing Clive and you can submit your questions for the Spurs legend by replying to this post.

Nivea’s England Legends team boasts nearly 200 caps between them, and is made up of the following ex pros:

The game takes place this Sunday at Dagenham & Redbridge’s Victoria Ground (2pm kick off), where Ivory FC get to test how far they’ve really come against an England Legends XI. It’s fair to say the Legends will be wanting to put the Ivory boys back in their place! Although there are no betting sites that are covering this game, there is sure to be keen interest from fans at the Victoria Ground.

The Great Football Experiment has seen Nivea For Men provide a struggling Sunday league team with the kind of training, equipment and expert advice usually only afforded to top pros. With mentoring and training provided by the likes of Terry Venables, Ray Wilkins and Ray Clemence, previously struggling Ivory FC are now flying high at the top of the Brentwood Sunday Football League.

You can see more details about the Great Football Experiment here: www.niveaformen.co.uk/football
We are backing Clive for Man of the Match and if he’s selected, one lucky White Hart Pain reader will get a great bundle of Nivea For Men products. I’ll choose a winner from anyone who submits a question for Clive in the comments here.