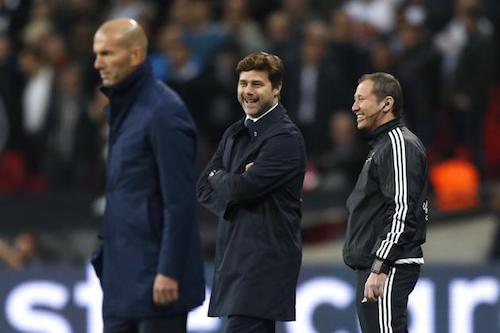 Tottenham Hotspur manager Mauricio Pochettino seems to have rejected the ‘dream’ job offer from Real Madrid, following the surprise departure of Zinedine Zidane just days after the Spanish giants won their third consecutive Champions League title. Loyalty to his current club appears to be the deciding factor for the Argentine coach.

As soon as Zidane announced the bombshell that he was leaving Real Madrid, putting the inevitable disappointment aside, their supremo Florentino Pérez immediately set the wheels in motion towards finding a successor to the Frenchman’s throne. Pochettino was the preferred option and it wasn’t the first time his name had been linked with the Santiago Bernabéu post.

Back at the end of January 2018, Real Madrid were struggling behind eternal rivals Barcelona in La Liga. In addition, they had also just been embarrassingly eliminated from the Copa del Rey by neighbourhood minnows, Leganes. Tottenham had also inflicted a draw and defeat on Zidane’s side in the Champions League group stage and Pochettino was already being tipped as a potential replacement.

“Football will bring me to where football wants me to be,” he suggested somewhat vaguely at the time, refusing to rule out the possibility of taking the reins at Real Madrid, at some point in the future of his managerial career. After all, it’s arguably the biggest job in club football and one that any quality coach would be proud to be associated with.

After penning a new five-year contract at the end of the 2017-18 campaign, Pochettino reaffirmed his commitment to the club. Likewise, Tottenham’s 2018-19 Premier League betting odds at 4/5 for another top-four finish underline confidence that with the 46-year-old at the helm, the team will continue to make positive progress on both the domestic and European fronts.

Nevertheless, even with the ink barely dry on his new deal at Spurs, Zidane’s sudden exit immediately prompted Pochettino to be considered as top choice for the Real Madrid job. Speculation increased with the man himself in Spain, at an event in Barcelona to promote his new book –  Brave New World – alongside its author and journalist, Guillem Balague.

As far as Balague was concerned, Pochettino’s future at Spurs was never really in doubt. In comments to Sky Sports, the Spanish pundit insisted that with no release clause in his new deal, plus the prospect of Florentino Pérez facing fearsome negotiations with his Tottenham counterpart, Daniel Levy, the interest from Real Madrid quickly wavered. Any serious level of interest, as such, was quickly put to bed.

Furthermore, there are reports suggesting that Pochettino didn’t want to be labelled a mercenary, were he to have forced the issue with Spurs, so soon after signing a new contract. Whatever the core motives, Levy will certainly be pleased that his coach will be staying put for the foreseeable future, especially as both share ambitious hopes with the team returning to a sparkling new White Hart Lane stadium this season.

There still remains some muted speculation amongst the Spanish media, claiming that Florentino Pérez and Real Madrid might keep pushing, even paying as much as £50 million to prise Pochettino away from Spurs. However, it’s pretty certain that any such attempts will now fall on deaf ears with the coach himself, and the Tottenham hierarchy.