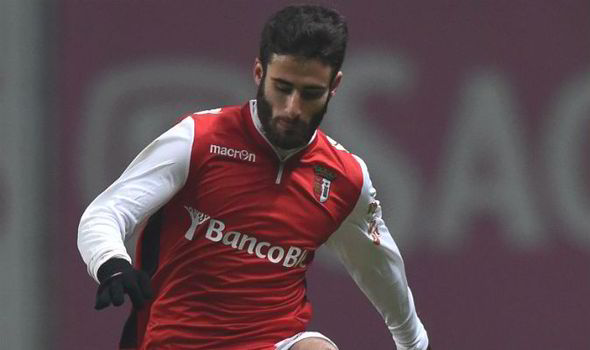 As is always the case at this time of year, Tottenham Hotspur are being linked with a number of players as the build up to the new Premier League season begins in earnest. Just the two new faces have come into the club thus far this summer, but both are high profile and definitely improve Mauricio Pochettino’s already healthy squad. Marseille’s Georges-Kevin Nkoudou is set to bring that number up to three in the coming days, and he also appears an exciting prospect. Pochettino is one of the smoothest operators around when it comes to bringing players into the football club. It is rare for the Spurs gaffer to sign a dud, and he always ensures that anyone coming in is a hard worker, adds quality, and that they will not upset the harmony in the Tottenham dressing room. As players meeting these criteria are few and far between, I don’t see more than one or two more additions before the end of the month. Let’s have a look at the potential targets.

Danny Drinkwater
One of the star men during Leicester City’s Premier League title success last season, Danny Drinkwater has been strongly linked with Spurs over the last few days. While there is no doubt that Drinkwater was instrumental in the Leicester City story, I’m not sure Tottenham are really in need of another centre midfielder. While he is more of a playmaker than Victor Wanyama and Eric Dier, his return of just two goals in the last two Premier League campaigns is not a great return and I just don’t know if Drinkwater is any better than what Tottenham already have available in the middle of the park. He was a player that will have been popular with punters that had Leicester City among their football accumulator tips last term.

Mattias Ginter
The Borussia Dortmund centre-half is another possible target for Spurs, but like the centre of midfield, I’m just not convinced that the club need more reinforcements in this position. Admittedly, Jan Vertonghen is currently out with ankle ligament damage sustained during training for Belgium prior to Euro 2016 but he should be back shortly after the start of the season. Mauricio Pochettino also has the likes of Today Alderweireld, Kevin Wimmer and even Eric Dier who can all play at the heart of the defence. While I rate Mattias Ginter highly, I don’t envisage us parting with £25m for the German’s services.

Rafa Silva
This looks like a better fit for Tottenham as far as I’m concerned. Portugal international Rafa Silva is reportedly very keen on a move to England, and at just 23 years of age, he has the sell on potential that Daniel Levy craves. Coming off the back of some impressive performances at the recent European Championships, Silva is a versatile player and proven goalscorer who would add something different to that which Mauricio Pochettino currently has at his disposal. Silva has been linked with a number of sides over the past few months including Porto, Everton and Leicester, but it could well be Tottenham who land the exciting young playmaker. Silva would definitely be an interesting addition, especially with Tottenham’s Champions League campaign on the horizon.