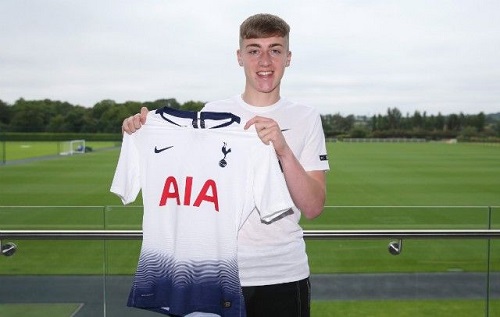 Tottenham Hotspur today completed their first signing of the summer transfer window, with the capture of exciting young winger Jack Clarke from Leeds United. The deal will see Clarke loaned back to Leeds for the upcoming 2019-20 season, with a fee believed to be in the region of £10m agreed between the two clubs. Mauricio Pochettino is keen to make significant additions to his squad during the summer, with talk of a sustained challenge for the Premier League title being the objective assuming the desired targets are delivered. Top casinos online and sportsbooks make Tottenham Hotspur around a 16/1 chance to go three places better than last term, with Manchester City the odds on favourites to retain their crown.

At just 18 years of age, Clarke has the potential to be a fixture at the Tottenham Hotspur Stadium for a long time to come. Leeds United are likely to be in the thick of things when it comes to the race for promotion in the Championship this term, the Yorkshire outfit having just missed out last season following a disappointing final few months. Leeds did make it to the playoffs but were dumped out by Derby County at the semi final stage. Jack Clarke was a pivotal part of Leeds United’s improved return in the Championship under Marcelo Bielsa, and the youngster looks set to be a key part of their plans once again following his return loan move.

Jack Clarke made a total of 25 appearances for Leeds United during the 2018/19 campaign, with his first team debut having come against Brentford on October 6th. Clarke scored town goals and is also capable of playing as a striker. He had been linked with a whole host of Premier League sides including Manchester City and Manchester United prior to putting pen to paper at Spurs.

“I’m delighted to join Tottenham and in the short term I’ll be giving my all to hopefully help Leeds win promotion,” said Clarke.

Clarke was happy that the deal meant he could spend another season with Leeds;

“It was a bit of a no-brainer really,” said Clarke. “The option was always there. I just thought it would be definitely better for my progression to spend another year here and I didn’t feel right leaving, finishing how we left last season.

“I think the manager brought me on a lot as a player and I think this season I’ll be even better getting another full season under him.

“Physically, I developed a lot playing senior professional football and with movement and other things, he brought me on massively.”

It will be interesting to see exactly how many more new faces make their way to the white part of North London in the coming weeks. The Premier League transfer spend is sure to rival real money casino games in terms of volume, with Tottenham likely to be particularly committed following a long period of inactivity where new players are concerned.