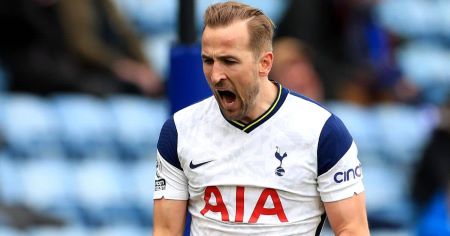 With the Tottenham Hotspur trophy cabinet remaining empty, it was only a matter of time before Harry Kane began to make noises with regards to a move away from the club. Some machines à sous would have offered odds on the Spurs hitman remaining at Spurs for the whole of his career, but unfortunately as things stand, that does not appear to be the case. While Tottenham supporters will no doubt be devastated with their talisman’s decision to move on, most fans would not begrudge Kane signing for a bigger club, especially when you consider the stage at which he is within his career. Harry Kane will be 28 years old come July, and if he is to make the most of the time he has left at the very top of the game, the decision to transfer really needs to be taken now.

According to reports in the press, it would appear that Manchester City are in the box seat when it comes to securing the signature of Harry Kane. Having recently lost the services of Sergio Aguero as well as a humbling defeat in the Champions League final, City will no doubt be keen to strengthen their striking options. According to The Sun, Gabriel Jesus and Raheem Sterling in addition to to cash would be on the table in exchange for Kane’s services. Obviously this has to be taken with a pinch of salt, but there is no doubting Manchester City’s desire for the player. Some might consider the signing a gamble on a similar level to blackjack online, but the upside definitely outweighs the risk as far as I am concerned. Other potential suitors include both Chelsea and Manchester United. There is also likely to be significant interest from abroad, with Real Madrid being an obvious contender.

Personally, I don’t think Harry Kane wants to leave Tottenham. I do however believe that he probably feels that it’s now or never. He could give things another season but with the uncertainty around a managerial appointment and question marks over Tottenham’s commitment in the transfer market, it appears more likely than not that Harry will join a new club before next season gets underway. With the European Championships on the horizon, Kane’s appeal is likely to increase further still. England are among the favourites to lift the prestigious trophy, and Harry Kane will be leading the line for his country, no doubt scoring a number of goals throughout the tournament. This will put him in the shop window for want of a better expression, and offers will no doubt come flooding in during the summer months. It will certainly be interesting to see just how strong the resolve of Daniel Levy is.