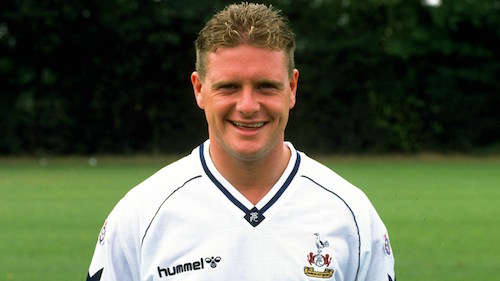 A guest post from Mark Ede, life-long Spurs fan and writer of The Focus of my Attention

Unbeknown to me at the time, both players played for the same English club side – Tottenham Hotspur. Upon finding out this information, my seven year old mind was made up, I was to become a fan of Tottenham Hotspur Football club.

In a world full of City’s, Uniteds and Rover’s… There is only one Hotspur..

Living in South London, I should have been a fan of Millwall, Charlton or Crystal Palace, but Lineker and Gascoigne were at Tottenham, and therefore it was in North London that my allegiance belonged, and White Hart Lane where I wanted to go more than anything.

This season marks the last year that Tottenham will play at White Hart Lane, before we leave for a year to allow for our futuristic new stadium to be built on the site of the existing stadium. Although the prospect of moving into our new stadium is extremley exciting, it is also tinged with some sadness. It made me think of my first experience of the place we have called home.

In December 1990, my Dad took me to my first game at White Hart Lane. Despite not being a football fan himself, he had secretly managed to obtain two tickets to the upcoming Tottenham vs Sunderland match. I remember the day that my mum collected me from school, and during the walk home, told me that my Dad had bought us tickets. I don’t think I had ever been so excited.

I was up early, and we headed to Tottenham in the car. Dad parked around the corner from the ground, we were there early and we headed towards the stadium. I remember the feeling I felt as I saw White Hart Lane for the first time, and remember being scared of the turnstile as I handed my ticket across. Then that was it. I was in, and was part of it. I was in White Hart Lane and ready to cheer as loud as I could. As we took our seats in the second row of the East Stand Upper, I couldn’t believe it. There was Gary Lineker, Paul Gascoigne and the rest of the first team warming up below us on the pitch.

I still remember the sound of the crowd, the feel of the ticket in my hands, the smell of the stadium, and the buzz that I received from being among the 30,000 crowd. The game didn’t start well; we were two down within twenty minutes or so. We scored two in the second half, but going into the last minute we were losing 2-3, until my idol Gary Lineker popped up with a last gasp equalizer. The fans around us went crazy and I was picked up by someone who wasn’t my dad in the euphoria. Quickly back down to my feet, Dad decided it would be time to go to beat the crowd. 3-3! What a game! I was hooked.

Despite finishing mid table in the league, Tottenham ended that season with a trophy, after a great run in the FA Cup, beating Arsenal at Wembley en route to the final. Both of my heroes scored in that semi-final, Gazza with one of the best free kicks in the history of Wembley, and Lineker netting twice. The final against Nottingham Forest will be remembered for Gazza being stretchered off, but for me it was much more than that. It was the launch of our new Umbro kit, which led to ridicule for the long shorts, (which would soon become the norm) which would be the first Tottenham kit I would own, and it would be for our courageous captain Gary Mabbutt lifting the trophy, next to the late Princess Diana in her green jacket.

I had been spoilt with my first year of being a Spurs fan. But things were going to change. Little did I know that with I wouldn’t get close to the elation of that season again until some twenty five years on. Within twelve months of the FA Cup glory, we had finished 15th, Gazza had been out injured all year, and Lineker was on his way to finish his career in Japan. Soon Gascoigne signed for Lazio, and my heroes were no longer Spurs players.

Despite seeing my heroes depart, I was hooked on Spurs, and in the coming years Teddy Sheringham and Darren Anderton quickly became firm favourites of mine. Those years that followed the ’91 success were tough for Spurs fans. The new Premier League era had arrived, and Sky dishes became more popular, which meant I was able to watch more live football than ever before. But there wasn’t too much to get excited about. I occasionally got to go to White Hart Lane, usually during pre season where tickets were cheaper.

Since then Spurs fans had to endure years of disappointment, aside from two League cup victories, there hasn’t been too much to cheer. There was a brief resurgence under Harry Redknapp, who led us into the Champions League with a great team and style of football, Gareth Bale emerged as a superstar, and rose to prominence throughout Europe in a team that included stars such as Ledley King, Luka Modric and Rafael Van der Vaart.

It is not until last season, where Spurs had a run at the title before falling away in the last few weeks of the season, that fans felt a huge connection with the club in all aspects. With the new season in its infancy, Tottenham fans are once again optimistic, we are a young exciting team, who are working for eachother and it seems all involved including fans are pulling in the same direction. The young generation have new heroes, with Dele Alli and Harry Kane being at the forefront.

My dad and I didn’t attend many matches together over the years, and if we did go to watch football, we would go to the sporadic game or two at The Den or The Valley, due to the local proximity. I think we only went to one more match together at White Hart Lane in the intervening years, which was David Howells’ testimonial in 1997.

I doubt that I will get another chance to attend a match at White Hart Lane with my Dad, with this year being the final year at the ground and at a reduced capacity, and Dad’s lack of interest in the game. He only went to games in order to put a smile on my face as a child. As I grew older I was able to go on my own or with friends, so there wasn’t a need for him to attend with me. It is a shame, but he still went out of his way to ensure that I experienced something that i loved. Even if he wasn’t particularly interested himself. He enabled me to have that special day, which has lead to a lifetime memory. I will certainly do that for my son. As we prepare to say goodbye to White Hart Lane, I will do so thanking my dad for allowing me to be in that number!

With the new season, we are delighting to see Spurs returning to the Champions League, and returning to Wembley. For a minimum of three games, we will play at Wembley against elite level opposition. We can see the new and improved White Hart Lane starting to be built, and its completion is coming in the next few seasons, I am optimistic that I will be able to provide my son with the excitement and anticipation of taking him to see Spurs in action as he gets older.