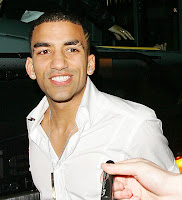 How would you feel if you were Aaron Lennon? The poor bloke is already five foot nothing and being compared more and more often to a hybrid of Tony Daley and Ruel Fox, now Spurs have gone and paid £17m for an ex-Arsenal player who is taller and plays in his position.

Admittedly, Tottenham do have UEFA Cup football and if they could well make it to the latter stages of the other competitions. In this day and age it’s not unrealistic for team challenging on a few fronts to have two top players in one position but if both Bentley and Lennon stay injury free, I can’t see Aaron getting much of a look in.

The club aren’t going to pay £17m for someone only for them to be a bit part player. Bentley will start most games so unless Lennon is going to play out of position, or be happy with the bench and Carling Cup games, I can’t see him having much of a future at Spurs.

Two things stick in my mind about Aaron Lennon. Firstly, November 5th 2006 when his goal at the Lane sunk Chelsea for the first time since 1990. Secondly, the excitement and pride I felt when he came off the bench in the 2006 World Cup.

His final ball was atrocious on occasions last season as was his finishing. Having blinding pace is an amazing ability, something defenders fear more than anything but their fear is eased once they realise their opponent is only going to put away 1 chance in 100 or put in one decent ball in a blue moon.

This part of Bentley’s game is second to none. His crossing and finishing for Blackburn in recent years has been superb and unless Aaron Lennon can step up develop that side of his game, I fear Bentley will make the right midfield position his own for years to come.