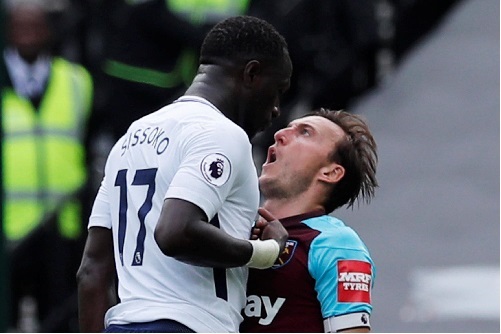 Moussa Sissoko could only manage to complete the first half of Tottenham’s pre-season friendly against Barcelona this past weekend before succumbing to injury. (Hamstring or knee depending upon which media outlet you choose to believe, I think Spurs have now confirmed it’s the hamstring). Mauricio Pochettino has stated that the Frenchman’s injury is nothing too serious, but it’s something he could likely do without on top of Victor Wanyama’s recurrent knee problems and Erik Lamela also being unavailable.

I’m not part of the Moussa Sissoko hate mob, but equally, I’m not a huge fan. He’s just a bit meh. Pochettino has managed instill his methods and work ethic in Sissoko to an extent, and that could arguably go down as one of our manager’s greatest achievements! The gaffer now appears to be confident in the player’s ability to follow instruction and do a job for him in certain games. That being said, I would not be at all surprised if Pochettino let Sissoko move on in this transfer window should a suitable offer be tabled. It’s widely accepted that Tottenham paid over the odds for the versatile midfielder, and his wages are also likely to be above what his services warrant.

While Moussa Sissoko’s injury is not ideal, I’m personally quite happy to see some of the younger members of the squad being given an opportunity in the middle of the park in his place. Oliver Skipp looked particularly assured during the aforementioned Barca clash. At just 17 years old, I wouldn’t want to be putting undue pressure on his young shoulders, but there no reason why he can’t be involved to some degree during the early stages of the campaign. Georges-Kevin N’Koudou is yet to receive many opportunities in a Tottenham shirt, and he is another who may well benefit form the current midfield injury list. N’Koudou put on a MOTM display last time out and that must have increased his stock with the Spurs coaching staff.

As far as Sissoko’s long term future is concerned, I’d imagine it lies away from North London. However, it could well be worth retaining his services for another season. The Tottenham hierarchy are definitely not in any rush to spend this summer and potentially end up with another Sissoko on their hands! It might be a stretch to say he was bought for buying’s sake at the very end of a transfer window, in a move which also served as a bit of a power play over Everton. Whether or not that was the case, I like what appears to be a more measured approach. I don’t get the feeling we are going to get Sissoko part two come Thursday week, and that has to be a positive even if one or two incoming bodies between now and then would be welcome.