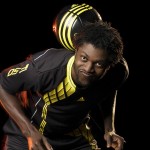 He is talented but hugely unlikeable and not just because of his stint at Arsenal. I couldn’t understand a word that came out his mouth during the World Cup when he was helping diversify the BBC’s panel of pundits. He puts in 110% for a few games a season but is largely lazy. I think that pretty much sums up Emmanuel Adebayor. While I might sound a bit negative about the current Manchester City misfit, I would also say that on his day, Adebayor is still capable of being one of the best strikers in the Premier League.

Early in Adebayor’s Manchester City career, he faced former club Arsenal at the City of Manchester Stadium. It was a game in which he was later to receive a ban for violent conduct and he also chose to run the length of the pitch to provoke the travelling Arsenal fans. That wasn’t what stuck in my mind about that match however. What did stay with me was the way Adebayor played. He was quite simply breathtaking at times and while the majority of Arsenal fans were happy to see the back of the Togolese attacker because of his questionable attitude, they were probably also left wondering who in their squad could produce such a meaningful performance.

It doesn’t look like Real Madrid want to retain Adebayor’s services and he has rejected talk of moves to Blackburn and PSG in recent days. Could he be the man to solve our striker issues or would he just create more of them? City are unlikely to want to sell to Tottenham but it could be a possibility if the price is right. Also, Harry isn’t scared to take ex Arsenal players to the Lane if he thinks they are good enough as was the case with William Gallas.

Personally, Emmanuel Adebayor wouldn’t be a player I’d consider for anything like the £25m valuation that is being banded about but if we could bring him in at a cut price, I think he is possibly worth taking a punt on. Without the lure of Champions League football, the world class players that we can attract are all likely to come with some baggage.