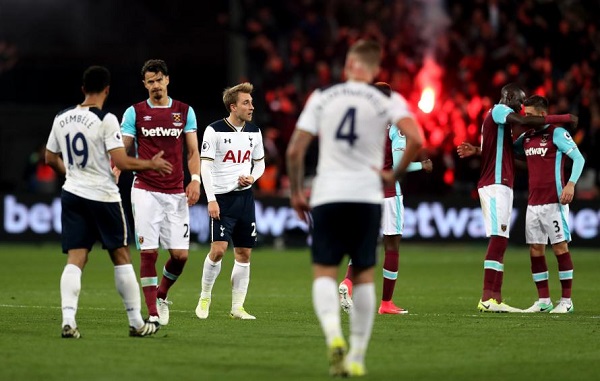 Thanks to their recent 3-1 win at the London Stadium, Tottenham now find themselves in the quarter-finals of the Carabao Cup. Admittedly, it was the least of the club’s priorities at the start of this campaign but it might now turn out to be their most important competition of the season.

Over the past couple of years, much has been made of the fact that the North London outfit have played a brand of football that has been very easy on the eye. However, at the same time, it is one that has failed to deliver anything in the way of silverware.

Couple that lack of trophies with no new signings over the course of the summer and you can begin to understand why fans are starting to become a little frustrated over Tottenham’s perceived lack of direction as of late.
It’s a situation that has not been helped by a handful of disappointing performances in the Champions League, as an exit before Christmas is now something that looks incredibly likely. Perhaps the chances of them winning the competition were slight but to be staring an exit in the face this early must be incredibly galling.

Not only that but it only further diminishes their chances of winning a trophy this season, now that there are just three domestic options up for grabs. Even then, the Premier League might be a step too far for Tottenham, a point that is reinforced when you look at the latest football betting odds.

Spurs, who have finished in the top three in the past three seasons, currently find themselves at odds of 50/1 with bet365 to win a first Premier League title, a price that suggests that they will have some work to do over the course over the autumn and winter months if they are to be viewed as realistic contenders.

So, with the quest to deliver silverware, it may well be that the Carabao Cup offers up a potential path to glory. Standing in their way in the last eight are arch-rivals Arsenal and, with the tie at the Emirates, it is one that certainly won’t be easy to come out on top.

However, if they can clear the hurdle that Unai Emery’s Gunners will pose, then they will have reason to believe that this could be the season that finally brings an end to their trophy drought, one that has been in place since in 2008.
And it is the very same competition, albeit with a different sponsor, which gave Tottenham fans their last real moment of joy. A 2-1 League Cup win at Wembley in 2008 was secured thanks to defender Jonathan Woodgate’s extra-time headed winner.

It may only be the lesser of the domestic prizes that are on offer but, more importantly, if Tottenham can win this season’s edition of the competition, then it could well prove to be a launchpad for the club, one that could then potentially see them go on to win much greater prizes further down the line.