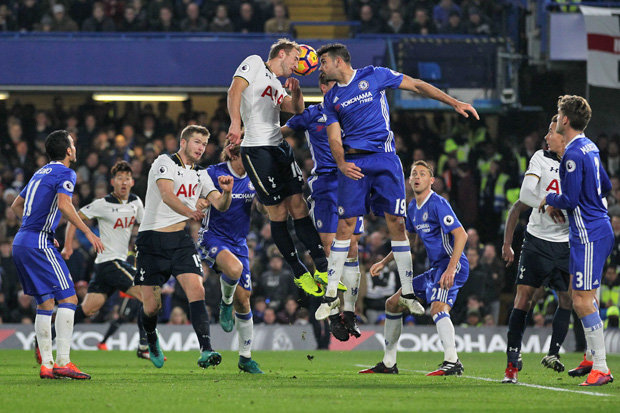 Not so long ago, Chelsea seemed to be running away with the Premier League title. The Blues were as many as ten points clear at the top of the table in March, and it was a foregone conclusion that they were going to win the title. Things have changed now. Defeats to Crystal Palace and Manchester United have reduced Chelsea’s lead at the top of the table to just four points, and Tottenham Hotspur are back in the race.

Tottenham have been the most consistent team this season after Chelsea, and there is little surprise that they are the Blues’ only realistic challengers for the Premier League title at the moment. Liverpool and Manchester City both have been inconsistent, Manchester United have had too may draws, and Arsenal are falling apart.

With only four points separating them from their London rivals, Mauricio Pochettino’s side will certainly feel confident. The world is their oyster; it is theirs for the taking, and it would not be a bad idea to take advantage of the best offers and place a bet on Spurs, backed at 5/1 with many bookmakers, to go all the way.

It is not going to easy, though, as on paper Tottenham do have the more difficult run-in than Chelsea. The North London outfit will face Crystal Palace (away), Arsenal (home), West Ham United (away), Manchester United (home), Leicester City (away) and Hull City (away). Chelsea will lock horns with Southampton (home), Everton (away), Middlesbrough (home), West Bromwich Albion (away), Watford (home) and Sunderland (home) in their final league fixtures.

For Spurs to clinch the league title this season, they simply have to win all of their remaining matches. Picking up maximum points against Crystal Palace at Selhurst Park, Leicester City at the King Power Stadium and Hull City at the KCOM Stadium should be easy enough, but the encounters against Arsenal at White Hart Lane, West Ham United at the London Stadium and Manchester United at home are going to be extremely tough.

Tottenham’s away record is also far from impressive. Spurs have picked up just 24 points away from White Hart Lane all season; if the Premier League table were based only on away games, then the North London outfit would be fifth. Should this be a concern for Pochettino’s side given that four of their final six fixtures are away from home? Probably.

Spurs fans, though, should be optimistic, as Chelsea are also likely to drop points. After all, they lost to Palace at Selhurst Park earlier this month and drew with Burnley at Turf Moor in February. Antonio Conte’s side have looked shaky and vulnerable defensively in recent weeks, and that could open the door for the remaining opponents.

Everton are aiming for a top-six finish in the Premier League this season, and Ronald Koeman’s side will be confident of picking up at least a point at Goodison Park. West Brom could prove tough for Chelsea to break down; manager Tony Pulis knows how to set up his side for a draw, and playing at The Hawthorns is going to be an advantage.

What Tottenham need to do between now and the end of the season is focus on themselves and on their own matches; there is nothing they can do about the outcomes of Chelsea’s matches. What Pochettino’s side can do is pile pressure on the Blues by winning all of their games. They also have a chance to damage the Blues psychologically this weekend when they face them in the semi-finals of the FA Cup. A win for Tottenham is going to further puncture Chelsea’s momentum, and doubts could start to creep in among the players.