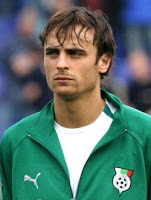 The revolving door at the Lane keeps on turning and the next couple of days should see Dimitar Berbatov finally tie up his move to Manchester United, while Andrei Arshavin will become a Tottenahm Hotspur player.

Both these transfers feel like they have been dragging on for longer than we had to endure Justin Edinburgh at left back, and that was a long frigging time!
Utd’s bid for David Silva was rebuffed by Valencia and it looks like they want to ensure they have another striker at the club before the weekend. Berbatov was always their main target until Dossiergate and it looks like they will get their man in the end.
I can’t say I’m disappointed. Don’t get me wrong, Berbatov has been magnificent for us since his £10.9m move from Bayer Leverkusen two years ago but the time has come for him to move on. His heart has been set on a move to Utd for a while now and although his negative body language has always been present and is just his way, it now screams get me out of here.
Arshavin isn’t the player Berbatov is but I’m sure he’ll be hungry, something which has been lacking from Berbatov’s game for some time now.
If the rumoured transfer fees are to be believed, we will basically be getting Arshavin and just under £10m in, and losing Berba. Like most of our work in this transfer window, it strikes me as good business.
Following yesterday’s capture of Cesar Sanchez things look like they are coming together just in time for the big kick off at Boro.