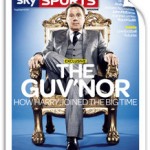 So, no players want to sign for us on a permanent basis then! The fact we can’t tie any of our top transfer targets down is a little disheartening but it’s probably also an indication that Harry Redknapp isn’t prepared to buy second rate players just to bring in bodies. He seems very much of the opinion that if the price isn’t right, we should just move on.

Redknapp has been quoted in the press today saying loan deals are probably the way forward for Tottenham in the current transfer market;

“I can see loans happening. I’ve got three players in mind that would not cost a lot of money.

“If we can pull off the deals you are talking about £8million or £9million for three players. Loans would certainly be a real possibility.

“People are going to loan players from all over the world, there will be loads because clubs are struggling to pay the wages. There will be high earners they have to loan out.”

I’m not really sure how I feel about loan deals. Part of me thinks it’s a good thing. You get the player in for the season just paying wages and if it doesn’t work out, you don’t have to retain their services. Often, these players are looking to put themselves in the shop window and put in decent performances throughout the season.

Usually where loans are concerned, it’s players from the top clubs going to smaller outfits. A side in the Champions League having to bolster their squad with loanees seems a little ridiculous. However, with the new rules regarding squad sizes, times may be changing. The wealthiest clubs are going to have a number of players surplus to requirements and loan deal may be the only viable financial option.

The only issue I can see is whether these big name stars are going to have enough hunger coming to Spurs on a temporary basis. Will they just rest on their laurels? If you take Jamie O’Hara’s spell at Portsmouth as an example; he worked his socks off week in week out. I can’t see many of those on the fringes of the Manchester City squad doing the same for Tottenham. Only time will tell I suppose. I’d imagine some business will be done one way or another this week.

I’m going to be the Spurs contact for Ian Wright’s Saturday football show on Absolute Radio.

I’ve been asked to share this Arsenal story with you all;
Arsenal Celebrations

Once you have chosen your team, click on leagues then enter the following code to join the EBA League:
163104-47048