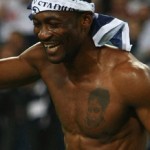 It looks like we’ve managed to get around £8m out of Sevilla for Didier Zokora. As much as I liked the guy, this has to be one of the best pieces of business I’ve seen Spurs pull off.

He’s been with us 3 years and was supposedly going to fill the void left by Michael Carrick but that just never happened. No matter how much of a nice guy he is, his contribution on the pitch has been nothing more than average in his time at Tottenham.

I first saw Zokora play in a pre season friendly at the Lane against Spanish outfit Real Sociedad. He looked quite promising in that game. Nothing outstanding but fairly solid and assured on the ball and I thought he’s only going to improve from here. The problem is, he never did.

It’s a shame we couldn’t have kept Zokora’s attitude and shoved it in Huddlestone or Jenas, both players with a lot of talent but very little heart. It’s such a shame Didier didn’t have a bit more about him on the field.

As soon as Harry brought in Wilson Palacios, the writing was on the wall for Zokora. I thought he’d be shipped out somewhere for around £3m but to get £8m has really astounded me. Let’s hope the cash is redistributed in the right way.