As wonderful as our nine goal victory was on Sunday, spare a thought for Wigan. As I said last week, I was not surprised to see a big score line but it was thanks in part to Wigan’s style of play. As difficult as it must have been for Wigan fans to swallow, I hope […]

Back to some real football this weekend with the return of the Premiership and the arrival of Wigan at White Hart Lane. It’s just a shame we have to wait till Sunday! I’ll be at the O2 for the tennis unfortunately, but I’m hopeful of arriving home to a positive result and lots of goals. […]

Guest Writer This post is written by guest blogger Kampanart Wong from Footy Shirts 4 U. We are always happy to have guest contributions, if you are passionate about Spurs and have something to talk about, drop us a line using our contact form. Spurs have went through a complete rebuilding process of the team, […]

With Roman Pavlyuchenko today insisting he must leave Tottenham, it made me think back to players of years gone by that have arrived with big reputations only to depart before making any impact whatsoever. Pavlyuchenko cost £14m just over a year ago, that’s serious money in today’s market for a player that isn’t English. Pav […]

So, are we going to bounce back from our lacklustre display against the old enemy or will the players put in another shocker against Steve Bruce’s men? The defeat against Stoke doesn’t worry me. We played well, it was just unfortunate. Even more unfortunate it came before a big game but I think we would […] 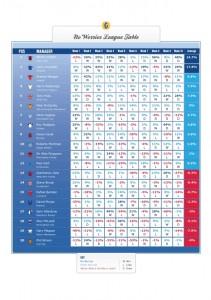 Just when Rafa Benitez thought things couldn’t get any worse, a study published by Foster’s today reveals the Liverpool manager is officially one of the most worried managers in the Premiership. The leading Aussie beer brand analysed the interviews and statements from every Premiership manager since the beginning of the season using its Ozometer, an […]